I bring up these debates now because Hofstra has in fact applied to host what would be their third consecutive Presidential debate in 2016! While the debate would be quite a while from now, it is quite exciting to know that Hofstra could be one of the ONLY universities to host three consecutive presidential debates! As a student here on Hofstra’s campus I put my name into the lottery to hopefully be chosen as a lucky ticket holder, however I was not one of the lucky random winners. Myself, and I am sure many other hopeful Hofstra students, are hoping for the 2016 debate to be on our campus and for more students to be chosen to attend as a guest! When I applied to be in attendance for the 2012 debate, I believe only 100 students were chosen at random to attend the debate. However, this event typically does provide students with at least one great opportunity. Students are allowed to volunteer to help out with necessary preparations for the day. This gives students a behind the scenes look at what it takes to host such a major national event and also provides some volunteer experience that can be put on a resume. 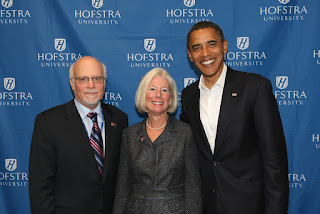