Greetings From The Increasingly Coastal Connecticut 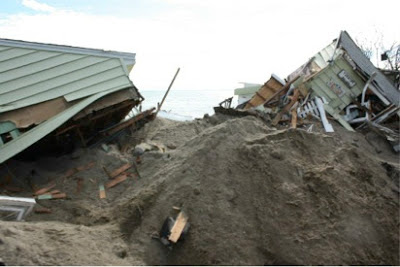 Greetings From The Increasingly Coastal Connecticut
By Lauren Bove, P'16

We now have power, cable, Internet and a cold fridge full of rotten food but still so many are in the dark and struggling to get by. My neighborhood in Fairfield lost power on Monday late afternoon. It was expected—which was why we were all rushing to pack away potential projectiles around the yard; and hungrily sucking up that last bit of electricity for cooking, work, charging devices and whatever else. Thanks to the ubiquitous and increasingly alarming news reports, we prepared for days prior. But what can prepare you for the unpredictable stress, mixed emotions, devastation and sadness—along with acts of kindness and camaraderie that occur after a storm like this?

Sunday, the night before the storm, the local high school opened up for evacuees and those in need. To my surprise, the parking lot was full of cars by 8 p.m. The waiting was the hardest part. Glued to the TV set masochistically, we watched the increasingly dire warnings issued. Officials in the know bandied about scary descriptions. Things overheard: “Worst ever”, “Like nothing in our lifetime”, “Largest”, “Fiercest”, “Devastating”, “Life threatening” and much more.

We got the message. The storm was a recipe for disaster and it wasn’t to be like any other. A Frankenstorm was coming—a mélange of weather with a soft, gooey tropical hurricane center, surrounded by rich, dark Nor’ easterly winds. If life was truly like a box of chocolates, we would have taken a dubious nibble of Sandy, shove her back in the box to shrivel up and toss out with the trash. (Along with the gelées we never liked and that dreadfully sour lime truffle. Why do they still make those?)

The storm hit Monday as expected, then dog-legged left. Sandy didn’t even have the courtesy of interjecting “Fore!” before she hit us. At that time it wasn’t clear what was happening in the rest of the east coast. We experienced winds that bent trees in suspiciously precarious positions. Flashes of light lit up the sky, from what we can only guess. The sound of a passing freight train lulled the family into a fitful sleep. My bedroom is located in the shadows of a 100-year-old maple. I kept envisioning the thing being blown over on top of me. To my surprise, I did not wake up with a mouthful of branches.

The morning brought all those in our neighborhood out to survey the damage. We must have looked like a staggering hoard of zombies, squinting at the ostensibly inappropriate sunlight. Without coffee or much sleep, it was determined by consensus that, “It could have been worse”, which was heartbreakingly the case for so many. The afternoon and following days since have been spent: searching for Wi-Fi, huddling around working electric outlets in Starbucks and the home of friends with generators, eating unusual combinations of foods—dried cranberries and peanut butter on a graham cracker got two thumbs up in our house.

Naturally, in our house, finding out how the Hofstra campus was fairing and preparing was of upmost importance. Thankfully the Hofstra Facebook page and email blasts kept us in the loop. I was able to speak with my son, a freshman living in the Netherlands, and he assured us that Hofstra was taking care of the students and planning for their safety. Food was never scarce, power was restored quickly and I’m quite sure there will be many stories to tell and lots to be thankful for this Thanksgiving.

After the storm more than thirty homes on the coast in Fairfield have been deemed uninhabitable. Neighborhoods and homes in New York and New Jersey as well as the surrounding areas have been totaled. My girlfriend’s home on Long Beach Island is a memory. Flooding on the beach in town floated a family member’s car and home away. My parents are still without electricity… but like they say, we’re at our best when things are at their worst. We will persevere. To everyone in the area and especially to our Hofstra family: May you always have walls for the winds, a roof for the rain, tea beside the fire, laughter to cheer you, those you love near you, and all your heart might desire.
Posted by Mary Coleman, Parent and Family Programs at 9:46 AM